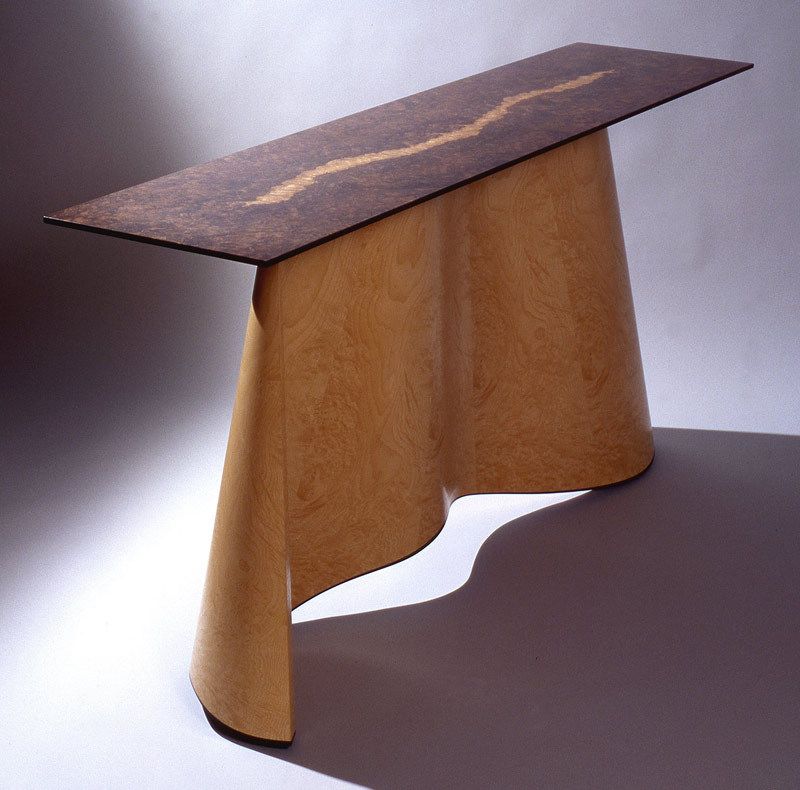 As a furniture designer it is true that, on occasion, I may look at a brilliant piece of furniture design by a contemporary and think, “Damn! I wish I’d made that!” This is surely a sign that the piece, and most likely its maker, are truly extraordinary. Having used this as a benchmark of quality for much of my life, I have been privileged to meet many people who fall into this category. However, there is no furniture designer maker who I find more gut-wrenchingly impressive than Rupert Williamson.

As a child Rupert suffered from mild dyslexia which led to him being entitled to grants that meant he could attend a local private school. Here he flourished, and also first began learning woodwork. At the time this was just a hobby for him, a piece in the jigsaw that had yet to be assembled. Of course, much later in his life, it would allow him to unlock his creative potential. 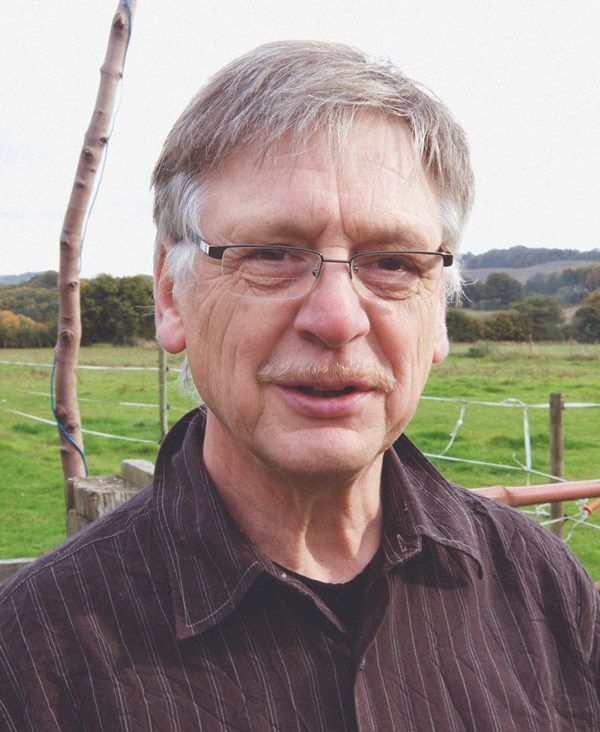 After high school, Rupert was introduced to an architect with a view to being enlisted in that profession. Fortunately, this man had the good sense to suggest that Rupert’s sensitive nature might be better suited to art school. As a result, in 1968 Rupert went for a Foundation Year at High Wycombe College of Technology and Art (now Buckinghamshire New University).

Art schools in Britain during the mid 1960s were in the process of major change. Rupert and his generation were among the first to receive a visual art education based upon the teachings of the Bauhaus. Its exponents were young and dynamic, and Rupert was carried along. Though Rupert enjoyed this time he did not fit in to the mould at the college, with work that railed against what was expected at the time. Yet, despite a certain amount of alienation, Rupert went on to be accepted to the prestigious Royal College of Art, studying under Professor David Pye. 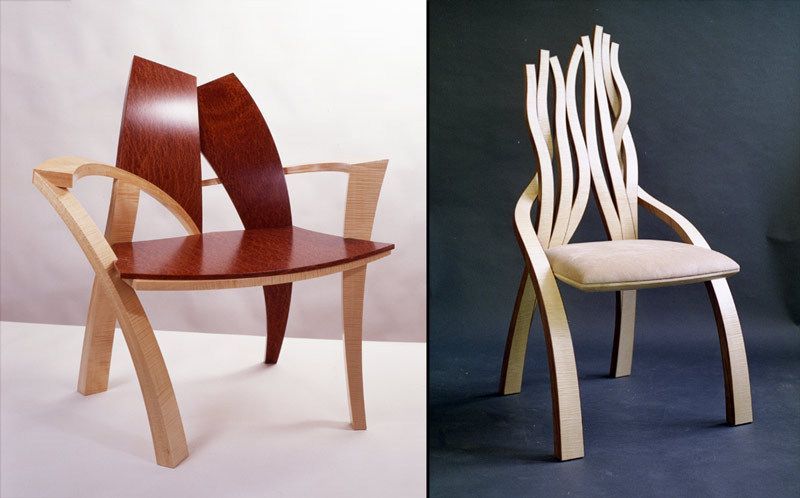 However, even in this environment, Rupert’s furniture design was not understood.

“I entered the Royal College of Art in 1969, confident that my way of designing, with its curves and colour, could be continued. Professor Pye soon put a stop to that, and I was instructed to produce designs that fit in with his design philosophy”

Rupert feels that he left the RCA with no more craft skills than he had before he arrived, and that despite his design skills, he was not only unemployed but worse, he was unemployable. Yet this was a time of significant change the late 1960s and early 1970s, where many young people were adopting new and novel approaches. New clients, of a like mind would help to pave the way for young designers like Rupert to build their esteem, and more importantly, their businesses.

Rupert, a moderately skilled furniture maker at first, became increasingly skilled as he sought to extend the boundaries of his materials. Pushing timber to its limits, bending it, laminating it, in a small-scale workshop unconcerned with industrial production—this became not just a design challenge but an aesthetic decision for him. Seeing Rupert’s success was exciting for those of us following behind. It presented an economic solution to the problem we all were grappling with: how to function as a creative individual while still making a living.

As Rupert was starting out, a friend commissioned him to make a modern version of an existing chair. The moderate success of this venture encouraged Rupert to take a different line of thought. He therefore began looking at traditional furniture making, working within a
European furniture context, and rendering it into the twentieth century. Developing his first design of this type from a chair in the Victoria and Albert Museum, where he went to make a measured drawing. He then went about evolving his piece into something distinctly different and modern. Made in blond wood—a step away from his hated brown—the resulting V & A Chair demonstrates the sophisticated and elegant expression that has become a hallmark of Rupert’s work. 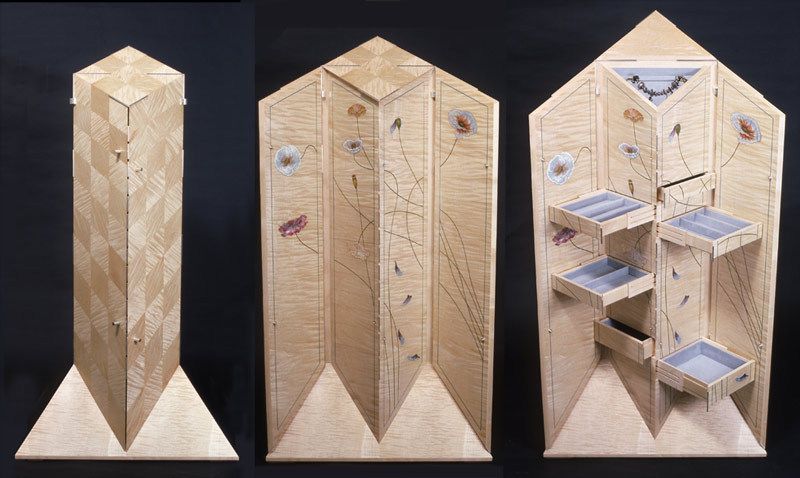 Then Rupert got his big break, a request for former students of the Royal College of Art to submit pieces for an exhibition at the colleges; submitting the V & A Chair for the exhibition in 1976. This turned out to be a profoundly important achievement, as it led to major commissions from wealthy clients and the opportunity to show his work in a Sloane Street gallery. One of his chairs, fittingly enough, was even bought for the collection at the Victoria and Albert Museum. These early commissions allowed him to develop a style that incorporated blond timber detailed with dark contrasting stringing, often with a lattice or even a Celtic influence visible in the structural form and decoration.

One of his most significant new clients from this time was a couple based in Scotland who are still working with him thirty years later; with their support and encouragement he was able to develop a more organic side of his aesthetic. Starting by commissioning furniture for a bedroom, soon they commissioned a bookcase to house rare old books. Despite rejecting his initial designs, Rupert eventually succeeded in producing a beautifully expressive work, his Tummel Bookcase, in 1982. Evocative of trees, wind, and weather, yet made in Makassar ebony detailed with gold leaf to echo the details on the bindings of the books it held, this bookcase was to become a most important early piece.

Rupert adopted another conceptual model when the same clients asked him to design two cabinets for the room the bookshelf was in. “Trees were not suitable for cabinets, so I took rocks, as they seemed to work.” The result was CK Drawers 1 and 2. Here he echoed the strata of sedimentary rocks in his construction, using different timbers to express this natural phenomenon.

In 1987 I saw Rupert’s work exhibited at Cheltenham City Art Gallery. One piece I particularly admired was Origami Jewel Casket. This had qualities of lightness, paper-thinness, that were unusual for a wooden object. The inspiration seemed to be the act of unfolding, of the unwrapping of precious objects, of opening leaves evocative of origami paper folding.

Ten years later Rupert continued to push his design process further and began to incorporate Computer Aided Design (CAD) as a way to prevent a feeling of being trapped. Using the computer as another tool Rupert feels he is much freer to design to a further stage before building anything; when using CAD he can quickly make a drawing into a 3D model in an environment and look at it from various angles. Yet like most great designers he does not let the process end here – it is not just code to send to a machine to be printed.

“I find it hard just to be a designer without having a hand in the making, although it is the challenge of the design that motivates and encourages me to continue. The feeling of creating something new is like a discovery, and gives me the sort of uplift that I feel when I’ve struggled to the top of a hill on a bright day and suddenly see the view open up before me when I get there. Often the process is such a struggle that trying to balance my aspirations blinds me to what I have created, so that it is often years before I see the results from a balanced perspective. But that is the nature of my design addiction.”

Actually making the furniture is an integral part of the process as Rupert develops a new piece. The imagination he uses is also only a part of the story. His images are not subcontracted to a skilled artisan; the images in his head take form in reality through the skill of his hands. His profound knowledge of materials, how they perform under the cutting edge, feeds back into his mindset as a designer: What can he do to stretch this material beyond its current boundaries? How can he play with this, have some fun, and still “turn a penny” on his work? Still, Rupert is no Luddite seeking to stay in a romantic past. He uses modern tools such as CAD extensively, but carefully, to enhance his creativity. Nonetheless, pencil and paper remain the most responsive, immediate, and intuitive medium for him to express the immense depth of his creative conceptions.