In Pursuit of Imperfection: The Summer show. 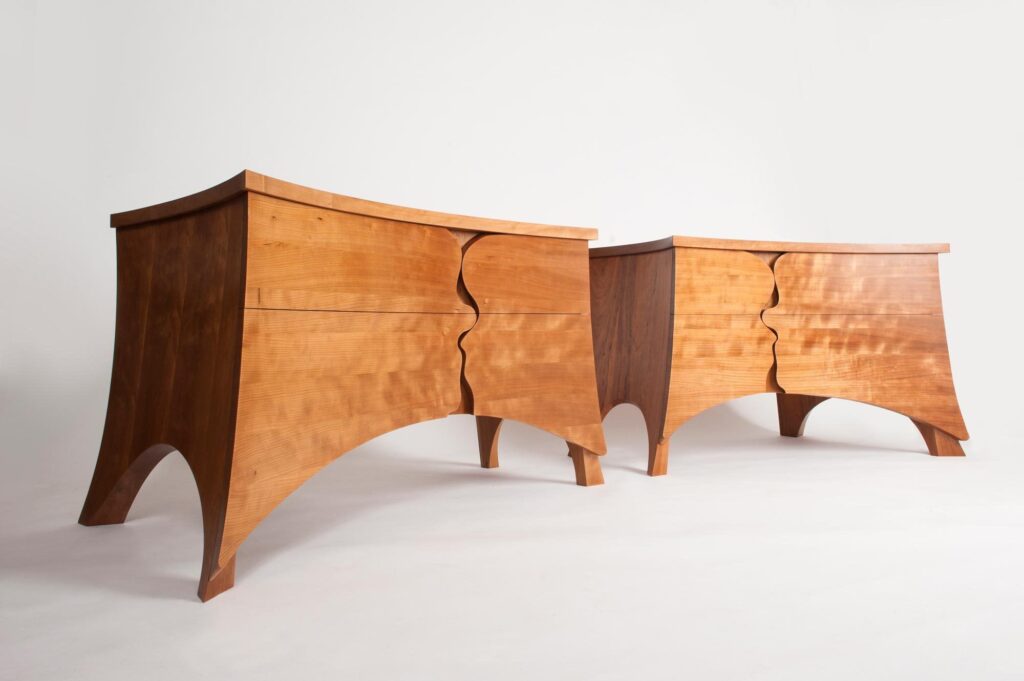 I drove yesterday to Bovey Tracey, its a nice drive from Rowden about one and a half hours over some of the most beautiful Devon countryside. It was a real joy, here I am at 67, established in my world, turning a penny, children  grown up.  To celebrate I had even treated myself to a newish but not new car.  A big German Audi AllRoad this was to replace my ancient 250,000 mile A 6.   My smile as I made the trip was going from ear to ear. Furniture makers need big cars.  In the back of the car were two cherry wood cabinets that I was delivering to The Devon Guild of Craftsmen. This was to a juried Summer Exhibition the most important exhibition in the guild year. At least I think so.

I first experienced a Devon Guild Summer Show with Alan Peters, a great man and wonderful maker who was to become my friend and mentor. The show was in a school building as the Guild, then, did not have a regular home. This was back in 1982. They were then a group of crafts men and women, potters , weavers , furniture makers who met to share ideas and support each other and The Summer Show was their main DO!

“Look at these drawers,” Alan would say, “see how you can open it on the corner and the shadow gap between drawer and carcase remains even, as you pull the drawer out”.  I was just beginning to come to terms with being a maker and a designer, I wandered about that show mesmerised my the incredible expression of humanity of the work around me. Excellence in all forms and in all materials, clay wood wool. Here were men and women struggling, and often failing, to bring forth the very best of who they were. Not repeating what they had done before. No, The Summer Show was about something that you had done that year that was a push into the new.

Then the Devon Guild of Craftsmen grew up . They bought, with members loans and huge mortgages, a mill house in the centre of Bovey Tracey . I was called on by Alan to help out. “Can you come and give me a hand.” he said. WOW , me helping Alan Peters. What he meant was will you spend the weekend in my machine shop milling a huge stack of Devon Ash to 20 mm whilst he and Trevor Pate, another great furniture maker in the guild, went off to do a shop fitting job in the new building.

Now the same building is on its third shop fit with government funded extensions and staff, OH… lots of staff. Now its all about the building and the concurrent wages bill. The membership of 240 members with their skill and knowledge have somehow become very much secondary to that. But we still have a Summer Show. My two cabinets, with over 400 hours of loving care and attention will go with all submissions into a juried selection process. As a long standing member I have been a part of that selection process and have no fear of it. As a member of the selection committee you will be working with a potter of thirty years experience and a weaver of international repute. When you see a good piece you all know that its good . The same with the piece which is the brave failure. You all know that its a dog.

The pieces I have put up for the judgement of my peers are a quiet pair of bedside cabinets. They are a part of a new series for me,  pieces for my home and for my wife Carol. For nearly thirty five years I have been making for clients. Now I can focus on what I want to live with. The thing that seems to come out, is complex simplicity. An image that implodes not explodes . An image that is superficially simple, but very complex beneath the surface. An image that engages with you over years not moments. Oh, I have never seen that before as the sun catches the edge from a low evening angle. These are not pieces for the giant photo competition, the one we all engage in as professional makers, these are pieces for Carol and me. Hopefully I will have many more in the same vein  ahead of me.