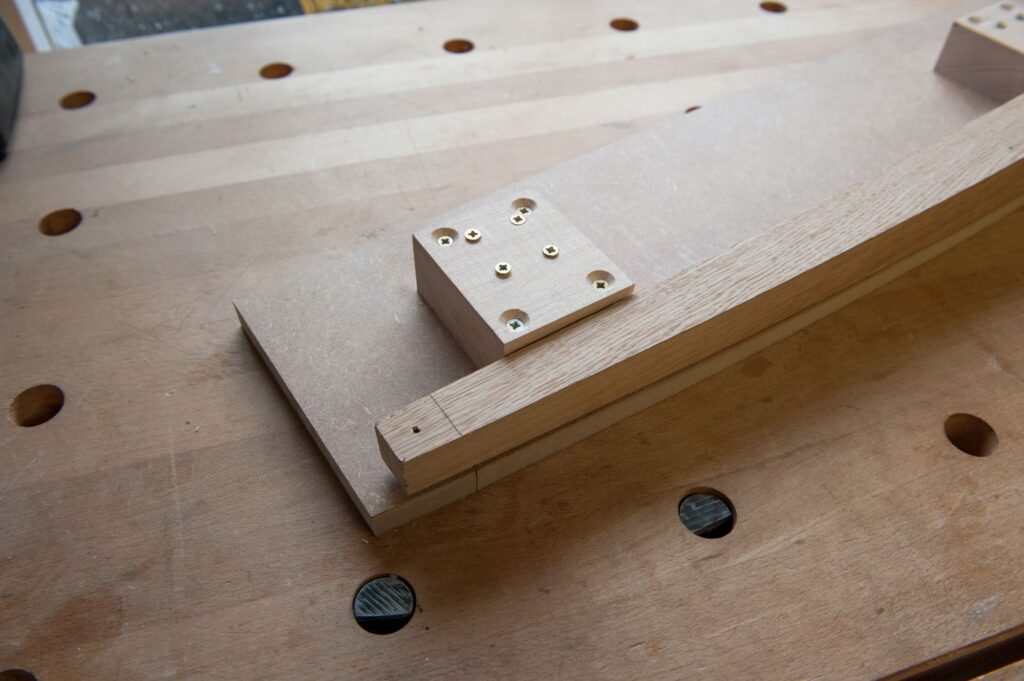 I would hate to suggest we use jigs in our own workshop unthinkingly, heaven forbid, but I will talk briefly about two jobs we have in the workshop at the moment that have made extensive use of jigs. The first is a batch of ten dining chairs made by David Woodward. Here David has had to make a rough softwood prototype of the chair and then make a second “finished” prototype. In the process of making this second prototype, he has designed a set of jigs which will enable all ten chairs in the batch to be manufactured economically. We decided that, as we believed the chair was a successful design and would make a marketable product, we would spend a bit of time making jigs to eliminate some of the more tricky handwork. The result has been that David has spent a good few weeks making a set of jigs that are so clever if you put them in the same room as a spindle moulder and come back in the morning you will find a pile of chair back leg components all ready spindled up waiting for you. This, I suppose, is another damn good reason for having a room to keep these jigs in. The prospect of wading knee deep in back chair legs each morning is more than mind and body can bear.

Now the prospect of making this batch of chairs entirely by hand is a rather daunting one. Making the two prototypes was a fresh and challenging task. Making ten by hand is a task that I wouldn’t cheerfully wish upon anybody and especially not upon a sensitive and gifted craftsman like David Woodward. The question I suppose is, would the task of producing, repetitively, ten chairs by hand have been more dispiriting than the intellectual challenge of producing a set of jigs followed by a brisk batch production period?

…we believed the chair was a successful design and would make a marketable product, we would spend a bit of time making jigs in order to eliminate some of the more tricky handwork.

The other job that has involved a wonderful jig, or is it a fixture, is a desk being made by Graeme Scott. Usually, when there are problems in the workshop, it is my fault, and this is a very good case in point. I designed a desk in Walnut with a very shallow curve along the front edge. Graeme took one look at the drawings, retreated quickly to his calculator and came back with the problem that we need a router mounted on an eighteen-foot trammel bar to make that curve. Now here we come to jigs and fixtures. I am not sure quite what I am talking about here, but I have got a feeling that a fixture is a jig where the job is kept in one place, and the tool, or tooling, whizzes around it guided, in this case, by an eighteen-foot trammel bar. Now, because this job had a curve not only in plan but also in elevation, this eighteen-foot trammel bar was used not only to cut the front edge of the desktop but also to make ring-fence jigs to make a moulding on the spindle moulder which would later be applied to the curved desk front. Trying to describe it is hard enough. Actually doing it was great sport. When Graeme and I sat down to work out how this desk would be put together he wouldn’t be tempted into tackling it with a hand made moulding plane and, now I see the problem more. Clearly, I am inclined to agree with him.

But where then is the evidence of “workmanship at risk”? Where is that something special that can only be sensed when somebody touches a piece of truly hand made furniture? We are, I know, talking now about intangibles, about the myth and magic, but also about the very essence of what matters in a piece of this kind. However, I firmly believe that if that spirit is to be imbued in a piece of work, it must be imbued by skillful, caring, craftsmen like David Woodward and Graeme Scott. And if the process of manufacture has involved technical whizbangs like jigs and trammel bars, then Craftsmen like David and Graeme must be all the more careful in their finishing, fitting and final fiddling about to impress their presence upon the object they are making. This is all about human contact and human care. For without it, whatever is made becomes just another item of manufacture. So easily modern cabinetmaking can become just a pile of jigs, a thicknessing sander and a spray booth. That I feel would not only be a sad reflection upon our age but a criminal waste of talent, energy and sensitivity.