A tale of sash cramps and grinding wheels 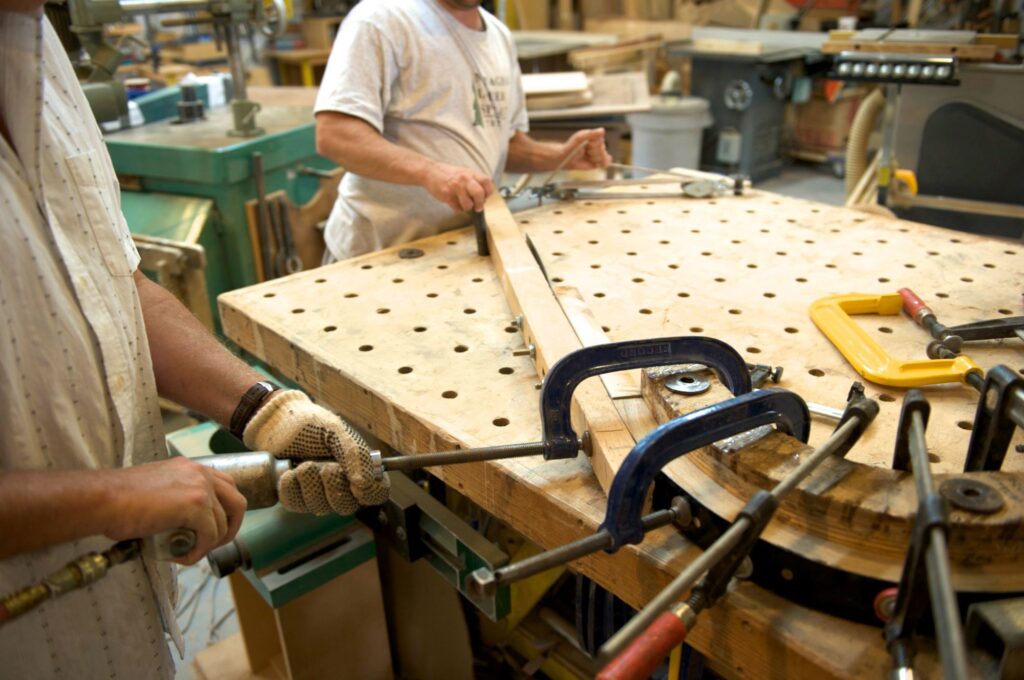 When it comes to sash cramps, there is a choice that can be made between all-metal cramps and cramp heads. Cramp heads are metal ends that mount upon a wooden bar. This allows you to make the bar to whatever length you require. We have got by in the past with a few large all-metal sash cramps for big glue ups whilst the majority of work is done using cramp heads and workshop made wooden bars.

These are a much better design as the more pressure one puts on the cramp the more the cramp head pulls down onto the bar.

The old workshop is equipped with cramp heads made by Record, whereas the new workshop has gone over to cramp heads made by Paramo. These are a much better design as the more pressure one puts on the cramp, the more the cramp head pulls down onto the bar. However, I would criticise the quality of the chains that Paramo use to attach the pins to the cramp head. We had to replace the split links at either end of the chain to give any degree of security. Nothing is more annoying than losing a pin for it renders the entire tool useless perhaps at a very critical moment.

The advantage of cramp heads over all-metal sash cramps, to my mind, is that because the bar is made of wood, it is lighter, more pleasant to use. The fewer bits of metal that you have swinging around a job during a glue up the better. And the final advantage, I suppose, is that it is possible to change a short bar for a long one. So if an unusual problem presents itself, it is within your power to make a cramp of unusual lengths from workshop scrap. Bars should generally be very carefully crafted and not made from workshop scrap. The holes should be drilled with precision and the bar made from something quite strong such as Hornbeam or Ash. Keep the bars well waxed, and they will last you for many years.

Of course, with the new workshop, we also needed another duplicate sharpening system. Fine workmanship is very much dependant upon sharp edge tools and to achieve this for the last ten years we’ve had a system based around a water-cooled grindstone to grind the initial bevel, and a set of Japanese water stones to hone the secondary bevel. The grinder we use is one that was originally developed for the butchery trade and I can wholeheartedly recommend it. In ten years we have never had a problem with our Sharpenset grinder. There is, however, a minor problem in that you do have to put up with the pond life.

The Sharpenset recycles a certain amount of water kept in a reservoir beneath the stone. All kinds of bits and bobs seem to collect in there, half-eaten sandwiches, slurry from the grinding wheel and, of course, the pond life. After a few weeks of use, the pool of water beneath the Sharpenset grindstone has a definite animal presence. It can reach the stage when it is not only smelly, but people would hesitate before putting their fingers in there. Cleaning the pond out regularly, and it should be done regularly, is, however, a small price to pay for an absolutely superb sharpening system. Although the Sharpenset is made in England, the water stones that were used for the next step in the operation, the honing of the blade, come from Japan. It is a great sadness to me that nowadays there is no place in our workshop for the traditional oil stones, such as India and Arkansas. I remember sweating blood to save up enough money for my set of sharpening stones, and they sit somewhere on a shelf unused and neglected and that, I suppose, is progress.

The grinder we use is one that was originally developed for the butchery trade and I can wholeheartedly recommend it.

Similar progress seems to have been made in the area of screwdrivers. We thought when we were drawing up a basic equipment list that, rather than buying a whole set of screwdrivers of different sizes, effectively duplicating the set in the old workshop, we would buy a large cordless electric screwdriver. Now we’ve had a small Hitachi electric screwdriver for a few years. This has been a nice, well-balanced tool and has taken quite a lot of stick over the years so far without giving up the ghost. However, being a small model, it does always seem to be running out of steam when it is needed most. The new screwdriver is a much larger model made by a company called Metabo. I really was very surprised and impressed by how long a cordless tool such as this can hold a really very powerful charge in the battery. Certainly, it is easier nowadays driving in modern twin threaded screws, but these screwdrivers can really keep going for an enormously long time. I suppose before long the racks of screwdrivers will be gathering dust as well. There is a price that one has to pay for the convenience of these cordless screwdrivers, and that is size. To get the power, it seems to me that the screwdriver is quite bulky. Our small Hitachi was dainty and well balanced. The new Metabo is quite a big gun to tote around, but it does fit inside a chair so it can be used for screwing on corner blocks but only just for it is a tight squeeze to get it in there.

Of course, whilst all this fiddling around with the new workshop has absorbed a lot of our time, somebody has got to be continuing making things to help pay the bills. This summer seems to have been the summer of the desks. We have just delivered a superb partners desk in Maple with a Birds Eye Maple top and Pearwood detailing and we are now going on to do some dining room furniture for the same clients. We have also been making up a Walnut desk for a local client and another Maple desk of a different design for a local doctor. Another very challenging and interesting job lately has been the development of a new dining chair. This chair was designed to complement our circular dining tables. The first chair was prototyped earlier this year, and the first batch of ten chairs was delivered very recently. I have great hopes for this chair, and I might tell you more about it in another article.